“The business is in my heart,” says Robert, whose great grandfather, Fredrick George Robinson, founded the painting and interior décor company in 1869 in London's East End.

Robert Star, Inc. founder Robert Robinson grew up within the general contracting culture of his family’s century-old London-based business, F.G. Robinson Ltd. He is proud to share this legacy with Robert Star clients.

"The business is in my heart," says Robert, whose great grandfather, Frederick George Robinson, founded the painting and interior décor company in 1869 in London's East End.

Initially, the company was based in Frederick’s small terraced cottage in the Borough of Hackney, where he lived with his wife Louisa and eight children: five boys and three girls. Quarters were tight, and Frederick’s painting and decorating equipment was stored in the family’s front garden.

In their early teens Frederick’s boys were integrated into the business, starting off with basic tasks such as wallpaper stripping or painting iron railings. As the boys became young men, F.G. Robinson Ltd. expanded into a full-service general contracting company and four of the boys branched off to launch their own contracting businesses. 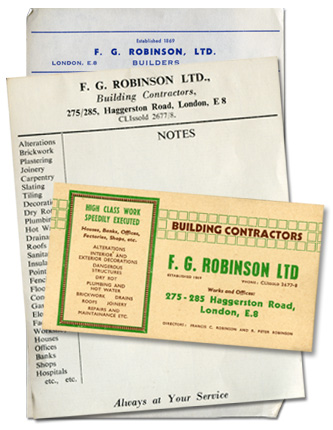 As Robert's 84-year-old Uncle Peter explains it, "A man would push his handcart to a job, strip, lime and whiten a ceiling, and push the handcart back to the cottage for two shillings and sixpence [about 30 cents]."

Charles grew F.G. Robinson Ltd. and established an impressive real estate portfolio in London’s East End. By the 1930s the firm had acquired six cottages, which accommodated offices, storage facilities, plumbers' and carpenters' workshops and woodworking equipment. The horse and carts were replaced with a lorry and a light truck. F.G. Robinson Ltd. was one of the early firms to have a telephone.

"Life was simple," says Uncle Peter, who joined F.G. Robinson Ltd. in 1947. "There were two metal spikes, about 12 inches high, built right into the desk. One spike was for accounts to be paid, the other for jobs paid-in-full. A book contained jobs to be carried out, and ticked off when completed."

The firm had its share of challenges as well. During World War I many young men were recruited for military service and F.G. Robinson Ltd. survived by employing an older set of laborers.

At the onset of World War II, several of Charles’ sons joined the military and were stationed to foreign posts. His elder son, Francis Charles-Robert’s father-served in England's Home Guard and continued the family business. Builders were in great demand to help repair the devastating results of heavy enemy bombings.

The F.G. Robinson facilities did not escape damage. Its six cottages sustained extensive damage from a German V2 rocket. Fortunately, repairs were possible between urgent war jobs. Several F.G. Robinson employees were lost to the war effort and the firm’'s lorry was requisitioned for home war service, temporarily reinstating the use of hand carts.

In the mid-1960s Francis’ son Robert apprenticed with F.G. Robinson Ltd. before relocating to Canada, and eventually to Manhattan where he founded Robert Star, Inc. in 1982.

Robert Star is now referring all painting inquiries to Paint-Tech Associates at info@paint-tech.com or call 212.472.1360